In previous blog posts, I described simple algorithmic models for drawing. In this post, I’ll expand on a specific element of style: line thickness.

Specifically, this post is about a theory for line thickness in drawing 3D objects. I developed this with Todd Goodwin and Ian Vollick, two talented Masters students, and we published it in a paper in 2007. I haven’t received much feedback or interest in the work, which could be for many reasons, and the theory is difficult to validate or “prove.”

Nonetheless, I believe there is some valuable insight in these ideas, and they provide some interesting rules-of-thumb for how to draw lines, at least in certain styles.

From abstracted shading to line thickness

The basic idea is quite simple. In abstracted shading, we can render a 3D object with a white material and a single light source at the camera position: 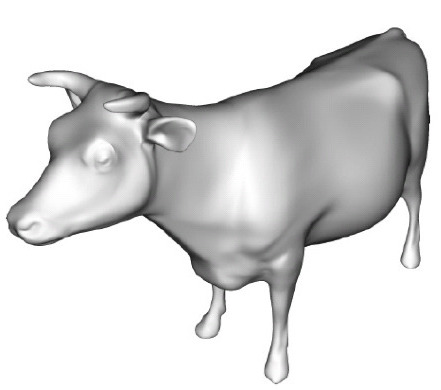 In our theory, we imagine that the representational artist’s job is to draw black strokes that best match this image. We imagine that the artist’s first step is ton get rid of all pixels brighter than a certain amount, and treat the rest as black: 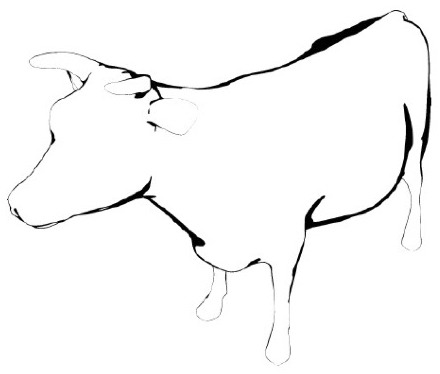 Then, if our theoretical artist uses an ordinary black pen, they could draw curves through all these regions, and all these curves will have the same thickness. However, if they use a brush or other materials that let them control stroke thickness, then they could produce this image: 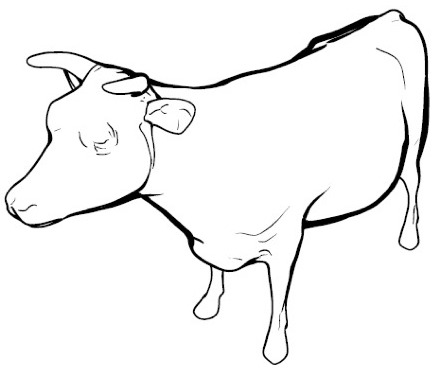 This image is a rendering using our algorithm, which chooses stroke thickness to best match the width of the “bands” of darkness in the second image. The specific details of this algorithm are described in the paper. (Some of the strokes don’t appear to match dark bands in the rendering; this is because those bands are too small to see in this rendering, and the pen is too big to draw such thin lines.)

Building on this basic approach lets us design a range of different artistic styles: 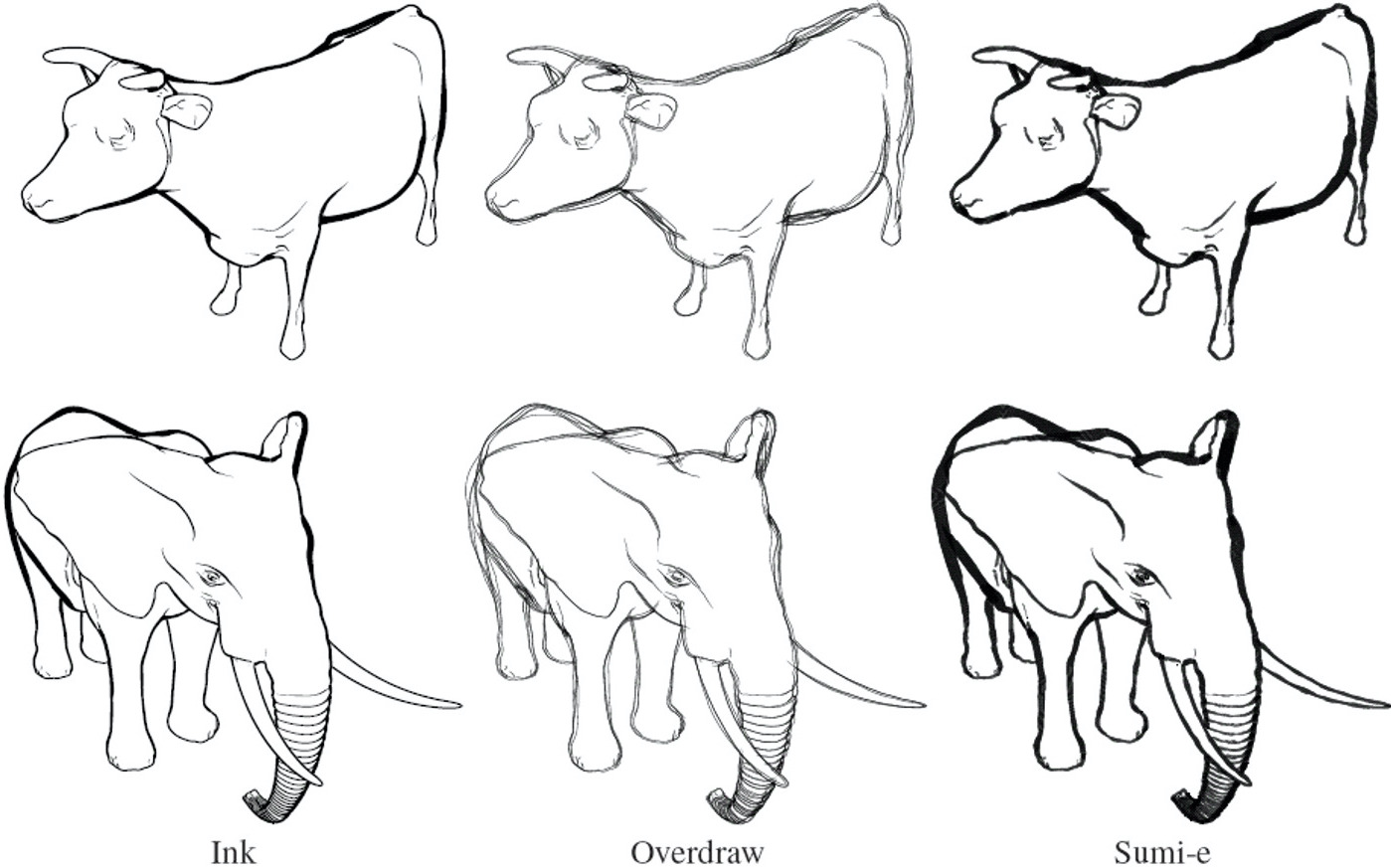 I actually first noticed a connection between lighting and brush strokes years earlier, when I came across a 3D rendering made with rim lighting. I noticed that the bands of light that appear in rim lighting often looked to me like delicately curved brush strokes.

We were able to reproduce a few real drawings with this method. Here are two drawings of a beetle, from a textbook on technical illustration:

We created 3D models based on the first illustration, and rendered it with a line drawing algorithm based on the principles above:

Note that the line drawing looks very similar to hand-made illustration, with similar locations for strokes and variations in stroke thickness. The line drawings look mostly identical, even though the stroke rendering model only has 3 parameters (and two are the minimum and maximum stroke thickness).

Here’s another example, this time using a panel from a comic book:

Strokes appear with the same thicknesses and in the same places as in the original drawing. Here’s an animated version of the model. This demonstrates how a simple theory can capture the complex effects in these illustrations.

Predictions and Rules for Line Thickness

In my art classes, I don’t remember receiving any instruction on drawing line thickness, nor have I found much about it in the art instruction books that I’ve looked through. The theory here can give some potentially useful “rules-of-thumb” for line drawing thickness.

Our theory predicts that line thickness will, generally, be inversely proportional to two quantities:

In addition, lines can’t be thicker than some maximum thickness determined by the artist’s tool and their drawing style. These values vary along strokes: strokes get thinner at high-curvature points, then thinner at low-curvature points.

For example, here is a rendering of some cylinders with our algorithm: 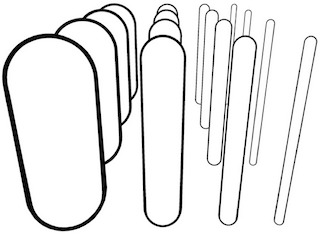 When we were developing this work, I spent a lot of time looking through illustrations and comics to see how much they fit this theory. And I found an enormous numbers of different drawing styles, and it was hard to directly test the theory, since we don’t have 3D models to go along with the drawings. Moreover, people draw lines in lots of different ways, and there is no right or wrong way; I think viewers are much less sensitive to line thickness, and often artists may not pay attention to nuances of line thickness or they may deliberately stylize lines in very different ways. When I draw, I find these rules somewhat useful, but they are difficult to follow precisely.

Nonetheless, I found many trends that do match our theory.

From this theory, we can make several predictions, or, perhaps, rules-of-thumb for drawing, and I’ve seen these repeated throughout many different drawing styles. As explained in our paper, all of these rules are consequences of our theory.

One phenomena that our model doesn’t currently represent is that there tends to be a sort of compressed dynamic range in stroke thickness, as if artists care more about relative thickness rather than about following these rules in an absolute sense.

This theory of abstracted shading only works for smooth objects; it’s not entirely clear how it applies to sharp edges, like on a box. Yet, we do see some of these phenomena applying to sharp edges as well, e.g., a distant building would be drawn with thinner strokes than a nearby building.

Finally, I think there is a more formal, testable prediction that we can make with this theory. Specifically, I predict that, if we render line drawings with our stroke thickness algorithm, then viewer will perceive shape more accurately, as can be measured by a gauge task. I think that the difference will be subtle, and the improvement may be largely confined to the areas near the contours. The stroke